Several days ago, I presented those who confirmed their participation in COFES-Russia / isicad-2010. Now – about the moderators of the working groups (WG). WG is a round-table which is intended not only to discuss an important topic but also to formulate results of the discussion and present them to the final joint round table combined with a press-conference. See the event’s agenda with the links to the detailed description of WGs.

I hope those who know Oleg Shilovitsky and Deelip Menezes will not be surprised to see them at the Moscow event not only as bloggers but also as moderators and speakers.

Oleg has over ten years successfully been working as the CTO at (ENOVIA) SmarTeam, and I believe that today he uniquely combines a very rich practical experience with corporate independence and striving for profound analysis on what’s next in PLM and around?

Deelip’s company SYCODE makes plug-ins for practically all CADs, so he must know everything. On the other hand, if you look through Deelip’s blog (for example try to search direct modeling) you can see that he thoroughly and meticulously studies the most fresh, trendy and actively developing methods for direct modeling, synchronous technology, ... and all that stuff which we codified in the name of Working Group 2: "Intelligent methods of 3D modeling”. People from at least SpaceClaim and LEDAS who are practically working in this domain will actively participate in WG-2 but Deelip is universally informative and independent...

Elena Konvisar has been in marketing for many years, today she manages this direction in a respectable integrator company NEOLANT, and is well known as an experienced moderator of round tables with participation of many CAD vendors of the Russian market: see for example, "CAD vendors without ties: a full transcript" (in Russian) . Elena asked Oleg Shilovitsky to help her: this time Oleg is involved as an active connoisseur and promoter of modern means of work in social networks.

Vladimir Talapov is for a long time productively working with students in Novosibirsk Architectural University. Vladimir has a Ph.D. in mathematics and combines the talents of a practical teacher, uninhibited brilliant orator and polemicist (see for example the article "Modern design industry is a world of greedy predators” – in Russian), as well - a connoisseur and promoter of advanced industrial technologies. The isicad-2010 exhibition presents many projects made by Vladimir’s students.
Topics related to the free platform, open source, etc., not accidentally fell into the hands of Nanosoft: see The upFront.eZine Tour of Russia. Part VI: Nanosoft. Anyone who looks at the "Who's Who" section on the company’s web site, understands that Dmitri Popov is the best candidate for being a moderator: he is from Siberia, he holds a Ph.D., and he is the author of a textbook, he was working for Xerox, he wrote a system of parametric design and he is a fan of summer skiing in the Alps ...
In the hardware working group we plan to consider several new products. Similar to the new software (WG-2), it was decided that discussion will be hold by an independent expert - Vladimir Malukh who, with his broad competence, can play a role of a customer presenting the entire field of engineering software. Vladimir is also known as an experienced moderator of round tables.
Autodesk is one of the apparent leaders in the field of AEC, in particular, in the solutions that extend design to the full cycle of integrated modeling of buildings. Pavel Hanzhenkov is the head of AEC sector at the Russian office of Autodesk with a previous experience in a similar position at Honeywell: his practical expertise has been evidently expressed in the vital topics that Pavel proposes for the discussion at WG-7.
Detailed description of all working groups is available here.
Posted by David Levin at 4:45 PM No comments: 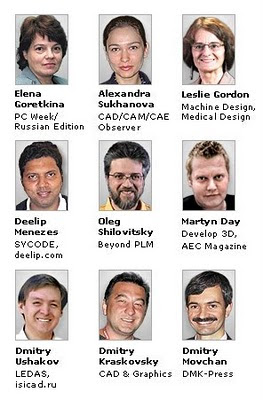 COFES-Russia will be held in 27 days. The key parameters of the event are of course determined, see the agenda and details. It's time to present some key participants.
All CAD/PLM - related Russian language media will attend COFES-Russia combined with isicad-2010 multi-vendor Forum. I am glad that some world-known media persons writing in English will also participate.
Elena Goretkina is a popular journalist writing for PC Week RE, those who read Russian can estimate an impressive list of Elena's recent publications.
Alexandra Sukhanova is the managing director of CAD/CAM/CAE Observer known by its intelligent approach to the domain. Alexandra is particularly famous by her fascinating series of interviews with the leaders of the world and Russian CAD/PLM market.
Leslie Gordon is for sure well-known to the Western CAD market by her work in Machine Design and Medical Design where Leslie is a senior editor. I hope we shall read Leslie's impressions of her upcoming visit to Moscow.
Deelip, Oleg, and Martyn are without my introduction perfectly known to the English reading CAD-people. I am looking forward to reading many fresh and well-illustrated reports of Deelip, new profound Oleg's thoughts (generated by Moscow atmosphere) about the fate of PLM, and Martyn's articles about the region new for Develop 3D - the magazine which in the twitter times gives hope to the paper media and which is becoming more and more popular in Russia.
Dmitry Ushakov is not only the key technological and product defining person at LEDAS but is also actively writing for isicad.ru / isicad.net, being a leading member of the editorial board of these editions. Dmitry Kraskovsky is the editor-in-chief of "SAPR i Grafika" (~"CAD and Graphics") - definitely the most known Russian CAD-monthly with an obvious and stable pragmatic emphasis. Dmitry Movchan is the founder and CEO of a publishing house DMK-press, which is the leader in producing CAD and IT related popular books in Russian. You see, there are three Dmitrys but this is just a coincidence:)...
It's quite probable that some more Russian people writing about CAD/PLM will attend the event on 21 September. Note that among such persons there could be Russian bloggers who usually prefer to stay incognito (How about participating in a press-conference?). Is such phenomenon known among CAD-bloggers writing in English?
Posted by David Levin at 3:57 PM No comments:

Technopark in Novosibirsk Research Center (LEDAS has recently become its member) is a somewhat small but real Skolkovo. Some people believe that the Center itself (Akademgorodok) is the best and much less expensive Skolkovo. But this is another story....
As in its early days, Akademgorodok is often visited by foreign guests: from Ashton Kutcher to Ralph Grabowski. Recently BBC published a 4-minutes clip about Technopark , see a screenshot below.
Also see below two pictures about a nice football event. 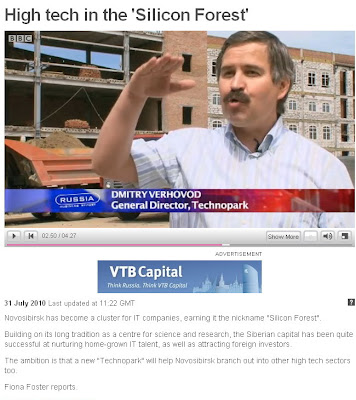 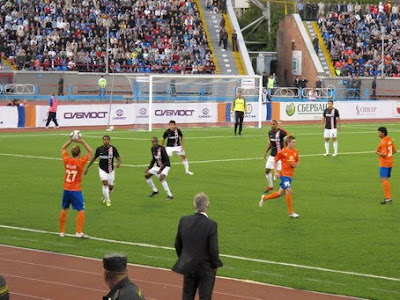 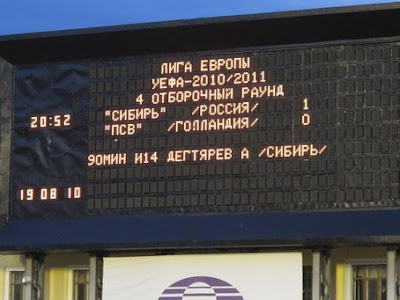 Posted by David Levin at 7:19 PM No comments: