This morning, at the Far East Komsomolsk-on-Amur aircraft plant of Sukhoi Corp. the first experimental 47-minute flight of the Russian 5G fighter was implemented. The new fighter named T-50 is considered to have technical characteristics close to F-22 Raptor (stealth technology), it has been designed in the same Sukhoi company, which earlier developed Superjet-100 – a new Russian commercial aircraft.

The Sukhoi Corp. has an advanced design and engineering bureau which widely and systematically uses modern CAD-technologies; all recent releases of Sukhoi are based on full digital models and can soundly be characterized as PLM-based production.

An official Sukhoi press-release mentions that Air Force of India will be the first customer of the Russian T-50 series.

See a video of the Russian NTV:

EMERCOM (officially called Ministry of the Russian Federation for Affairs of Civil Defense, Emergencies and Disaster Relief) has chosen Autodesk 3ds Max for building a full data base of 3D Geo models for the Russian cartography. Deployment will be done by the PSS Company – one of the Autodesk Gold Partners in Russia. Along with purchasing the software, EMERCOM invested into a profound training of its 20 employees that will be building the GeoDB for a vast region around St Petersburg.

EMERCOM is internationally recognized as one of the most advanced ministries of Russia: well equipped, trained, operative, and efficient in elimination of aftermaths. See for example The doctors EMERCOM of Russia continue to help the victims of Haiti.

Interesting that at the EMERCOM website (see a fragment at the picture) one can see a button named Fighting Corruption. If you click it, you will see – unfortunately only in Russian– a long (and regularly updated) list of publicly announced cases when the employees of EMERCOM were convicted (or even suspected) in corruption.
.
Posted by David Levin at 8:47 PM No comments:

Terminology and maturity of the CAD/PLM market

Oleg Shilovitsky wrote in his comment: "I hardly believe Autodesk will go toward PLM route. At least Carl Bass will need to withdraw his "anti-PLM rap" video from youtube first". For a more detailed Oleg’s opinion on the topic see his recent post PLM for Individuals – Integrate or Die?.

I think every person and every company have all rights to name themselves as they like (of course being careful with orange rectangles and so on). But perhaps mature industries and other domains of human activity should somehow follow an example of science – its fundamental resting upon a system of notions and standardized terminology. If PLM, digital prototyping, and other notions are already sufficiently defined then the community can more or less precisely determine whether somebody is inside or outside, moving toward or outward… – independently on a whatever video at youtube…

Following the example of science does not mean that we should artificially and arbitrarily define and freeze notions and terminology before they naturally become stable and mainly accepted: a process of elaboration/improvement/adjustment/refinement of terminology is natural and inevitable for any evolving branch of human knowledge. On the other hand, playing marketing-terminology games is something that can hardly help increasing maturity of industry.

My opinion is that the notions in question are far from the final definition, but they, on the other hand, are already sufficiently defined to enable understanding of whether Autodesk is in (or moving toward) PLM, whether PLM 2.0 still remains PLM, whether DS is fruitfully doing digital prototyping, etc. I think yes is a reasonable answer to all these questions.

Another illustration to the problem of notions is given in Paul Hamilton’s post 2009 - The Year of … Confusion?. This seems even more interesting and more associated with example of science – although of course not so exciting for the mass market.

Paul explains that while introducing Synchronous and Fusion technologies Siemens and Autodesk confused the market by groundless playing with terms of parametric and history-free modeling, direct and parametric workflows, digital model, and others. You may oppose to this by saying why should Siemens care about different terminology system – especially when it comes from a competitor? Nevertheless, I prefer Paul Hamilton’s position: he has proposed a detailed, reasonable and so far unique classification of important hot notions, which is likely useful for the CAD industry in general and it is not harmful for any particular producer of new modeling technologies…

So my opinion is that basic notions and terminology should at least be always respected, referenced, mentioned… which absolutely does not contradict to discussions and critics.
.
Posted by David Levin at 5:22 PM No comments:

The conference has just been announced and Deelip Menezes was probably the first who mentioned he will definitely attend.
Maybe LEDAS will be the second?

Yes, I believe the first ODA conference in Leiden was very successful for my company. In particular according to the contract agreed after Leiden with ODA, LEDAS is currently developing Geometric and Dimensional Constraints in DWGdirect.

Therefore, today we at LEDAS decided that Dmitry Ushakov (see his report about Leiden called “The prodigal son of Autodesk”) will attend Orlando to present (maybe at the technology workshop which is a new format announced by ODA for Orlando) the results of this contracts together with the new LEDAS developments related to variational direct modeling.
.
Posted by David Levin at 9:05 PM No comments:

Autodesk becomes a PLM Solution Supplier? What about Digital Prototyping from DS? 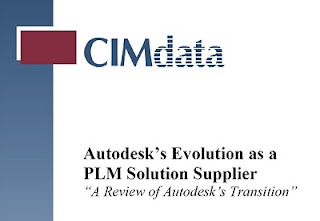 CIMdata has just released a program review called “Autodesk’s Evolution as a PLM Solution Supplier”. For a long time, isicad portal has been convincing Autodesk:) to enter the PLM club: this was one of the reasons for us to publish a summary of the review in Russian.

Now take a look at the fundamental DS slide which illustrates the company evolution: 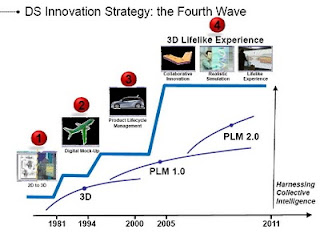 If you pay less attention to “PLM 2.0” than to “3D life-like experience, Realistic Simulation, Collaborative Innovation…”, all this looks like advanced digital prototyping. I found it funny to imagine that Autodesk and DS can someday exchange their marketing accents…
.
Posted by David Levin at 8:56 PM 1 comment:

COFES, the Congress On the Future of Engineering Software, a world known leading CAD/PLM-related event needs no introduction. I am therefore happy that Cyon Research announced its first COFES Russia Seminar which will be held September 14, 2010 in Moscow, Russia in partnership with LEDAS.
The Cyon Research info says: COFES has historically focused on creating an environment where the strength of our community takes precedence over our individual needs to sell, and where c-level executives can openly discuss the important issues facing business today. COFES Russia Seminar will bring together senior executives from firms in manufacturing, construction, and design to discuss innovation in the face of the current economic situation both globally and within Russia and the CIS.
The COFES Russia Seminar will be a part of isicad-2010 forum organized by LEDAS Ltd., see its tentative agenda at http://cofes.com/Russia (English) and http://isicad.ru/2010 (Russian).
Isicad, the biennial forum organized by LEDAS Ltd., is a recognizable brand for the Russian IT-community. Isicad-2010 is the fourth event in the line and will take place in Moscow on September 14, 2010 under the theme “CAD and PLM as tools of innovative economics”.
isicad Forums were held in 2004, 2006, and 2008 in Novosibirsk, Russia as multi-vendor conferences that brought together hundreds of regional CAD/PLM customers, practically all key CAD/PLM/ERP vendors operating in Russia, students, media, and others. One of the articles about isicad-2008 was called “Forum isicad: no analogues besides COFES”.

Brad Holtz, COFES and Cyon Research President, will be the key speaker at the 2010 event in Moscow. Along with plenary sessions, round tables, exhibition…, isicad-2010 agenda includes meetings with customers, visits to some companies, and other.

Participation in COFES Russia Seminar is by invitation. If you would like to be considered for an invitation to the event, please fill the English or Russian form.
.
Posted by David Levin at 8:05 PM No comments:

The State of the MCAD Market in Russia 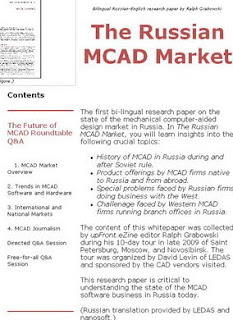 As the editor of isicad.net / isicad.ru and CEO of LEDAS, in summer 2009, I invited Ralph Grabowski to make a tour to Russia. I am happy we have together implemented this project: in early September Ralph visited St-Petersburg, Moscow, and Novosibirsk, where he attended eight CAD-related companies and (in Moscow) moderated a round table “Future of MCAD”.

The visit was in every detail described in Ralph’s well-known blog and upFront.eZine review. I don’t know the statistics of visits to those web sites but the Russian publications (at isicad.ru and at my Russian blog) that reflected Ralph’s tour were extremely popular.

Ralph has later composed a bi-lingual brochure about his Russian tour. This book (a pdf-file) became available couple days ago. A detailed info which in particular says
"the 126-page report will give you insights into the...
...history of MCAD in Russia during and after Soviet rule.
...product offerings by MCAD firms native to Russia, and from outside the country.
...special problems faced by Russian firms doing business with the West.
...challenges faced by Western MCAD firms opening branch offices in Russia"
was published as Ralph’s blog post The State of the MCAD Market in Russia .

Autodesk and PTC change heads of the offices in Moscow

Just after long (1-10 January) Russian New Year vacations it was announced that Alexander Tasev decided to leave his position of the head of the Autodesk Russia & CIS to continue his career beyond the company. As the company's notification says, Alex was 5 years running development of the Autodesk business in Russia & CIS and has contributed a lot into achievements of the company and unprecedented growth of its business in the region. Alex willingly cooperated with isicad: gave his interview to isicad.ru and isicad.net, participated in the International multi-vendor CAD/PLM Forum isicad-2008, etc.

Since January 15, Rudolf Danzer, an Autodesk Vice-President on Emerging Countries will temporary keep position of the head of the Russia & CIS office. Thanks to support of the Moscow and West-European Autodesk officers, Mr. Danzer has kindly gave his answers to the brief questions of isicad.net and isicad.ru, see his interview: "I am excited to be more directly in touch with the day-to-day running of the Autodesk business in Russia".

Couple days later, Mr. Valery Pragin was nominated as the head of the PTC office in Moscow. Mr. Pragin was for quite a long time working as a high ranked maneger at Intergraph and IBM PLM offices in Moscow. Valery says he likes PTC "because the company offers their customers not products but rather advantages"...
.
Posted by David Levin at 7:53 PM No comments: