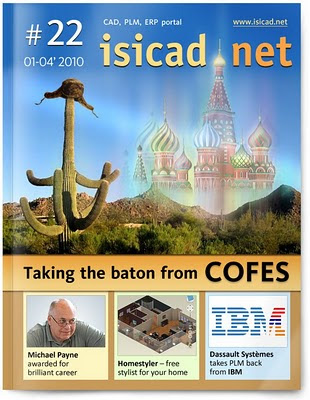 This is a brief overview of the news from Russian CAD/PLM market in January-April just published at
http://www.isicad.net/. A general impression is that the recession is over; at least actors of the Russian market stopped complaining and became active and hopefully productive.

I. Some topics considered traditional, or hot, or isicad-related

Aviation:
· Russian RRJ project became materialized and today everyone is aware or at least has heard from the media that such project was impossible without CAD/PLM
· Launch of the Russian Raptor-like 5G Fighter is one of the most impressive news of the reported months
· In April there was a big Russian conference called “PLM for aeronautical engineering: development, design, manufacturing”, see an announce (in Russian).

My conclusion: in contrast to 2006 or even to 2008, PLM in Russia is no longer exotic or considered skeptically.

Today LEDAS announced version 1.1 of its RhinoAssembly plug-in module for Rhinoceros 3D which introduces the ability to record movies of animated 3D mechanisms, support for seven languages, integration with several Rhino commands, and general improvements in stability and performance.

See detailed sections
- New Features in RhinoAssembly v.1.1
- Availability and Price
- About RhinoAssembly, Driving Dimensions and LGS 3D
- About LEDAS
in today's press-release of LEDAS.
Posted by David Levin at 5:44 PM No comments:

Based on its successful technological solutions - geometrical solvers LGS 2D and LGS 3D as well as its original technology of variational direct modelling LEDAS is building a Driving Dimensions (LDD) product line which aims at making advanced mechanical CAD technology available to all users of popular 3D software at an affordable price.

LDD-products have already been downloaded by ten thousands users from several dozen countries. One of the main products - LDD RhinoAssembly has been localized for six languages in addition to English.

Results of the LDD projects are best illustrated by video clips so LEDAS has just initiated a YouTube channel: http://www.youtube.com/user/ledasgroup where you can see live versions of some pictures shown below:

See also today's press-release LEDAS Adds Movie Recording and Localization to RhinoAssembly .
Posted by David Levin at 8:20 AM No comments:

There are symptoms of increasing interest in Russia to open source solutions. I have recently mentioned this in Russian Parliament Promotes Domestic Linux. Now one more example: a conference «Russian Open Source Forum 2010» to be held on 25th June in Moscow.

The conference organized by VDEL – a Russian distributor of Red Hat – aims to discuss:
· How efficiently open source software (OSS) can satisfy the typical needs of Russian state and commercial organizations?
· The truth and myths around OSS: what are typical risks of deployment and how to minimize them? What are the final advantages?
· Business models of OSS: what are the real costs of free software?
· How to reasonably combine OSS with proprietary software?
· What are business advantages of OSS and how to justify a migration project?
· What is stopping open source in Russia?

The conference includes two sections: OSS for the state and OSS for the commercial sector. Among other topics, state section is going to discuss “Can global experience be applied for transition of Russian governmental offices to OSS?”, while one of the topics at the commercial section is “whether transition to OSS brings some visible cost savings”.
Well, open source and clouds (see Clouds in Russia) are perhaps the best way to overcome illegal software.

Yesterday LEDAS announced the availability of version 3.0 of its LGS 3D geometric constraint solver. LGS 3D permits users to express their design intent through a combination of geometric constraints and driving dimensions.
Version 3.0 contains many improvements in stability and performance; as well, it implements new features requested by developers of history-free 3D geometry editing applications.
Version 3.0’s primary new feature is its ability to adjust the radii of circles, cylinders, and spheres automatically to satisfy constraints. This function allows users to modify fillets, blends, and round holes in their models parametrically. By default, the radii are fixed so that existing assembly design and kinematic simulation applications implemented with previous versions of LGS 3D continue to work as expected.
Version 3.0 of LGS 3D brings LEDAS significantly closer to the implemention of the company's strategic program announced in October 2008 in the white paper Variational Direct Modeling: How to Keep Design Intent in History-Free CAD.
For more information, see press release LEDAS Ships LGS 3D v3 for Variational Direct Modeling Developers.
.
Posted by David Levin at 7:26 PM No comments: