A news about Bricscad V12 which has brought direct modeling to Linux was couple days ago exhaustively promoted by a Bricsys news, posts by Ralph Grabowski and Deelip Menezes, and certainly by many others. You will not be too much surprised by my impulse to proudly remind that the underlying technology came from LEDAS - as it was formally fixed by a Bricsys-LEDAS deal from the last October.
According to that deal, a team of former LEDAS developers headed by Dmitry Ushakov, joined Bricsys software development ecosystem in the guise of a Bricsys daughter establishment - a newco called Bricsys Technologies Russia (BTR). BTR team is currently renting a part of the LEDAS offices so that both teams, although definitely working separately, can fruitfully and friendly contact.
Now I have a kind of linguistic task: to explain you a title of this post and a meaning of the picture hanging at the door of the BTR office: 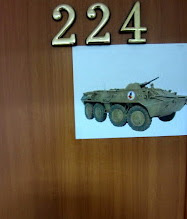 Well, as you can see, the picture shows an ATC (armored troop-carrier) which in Russian is "BroneTranspoteR" (bronya = armor) - known to everyone with native Russian as BTR. Judging by a series of Bricscad V12 releases, this BTR-image is much inspiring for Bricsys Technologies Russia which is very fruitfully contributing to the recent and future results of Bricsys.
A linguistic aspect is sometimes much easier, for example, take a look at another door: the compass hints that it is about the LEDAS  project related to KOMPAS 3D of ASCON. 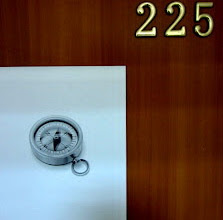 Posted by David Levin at 5:03 PM No comments:

ASCON opens its office in Munich

The office named ASCON Software Germany GMBH has been established to support local partners and customers in Germany, Austria, and Switzerland. Today, ASCON emphasize its abroad activity on indirect sales so its office in Munich will be oriented on training of partners and implementing marketing projects. The office has three employees including one with 20-year IT experience and a manager with 10-year experience in MCAD support and training.
ASCON provides a rich spectrum of PLM solutions however the most known company’s product is MCAD KOMPAS-3D localized for English and German.
ASCON is currently very active in establishing and expanding its international presence including participation in COFES 2011 and COFES 2012 and establishing  partnerships with Western companies. It also is rather sensitive to development of technological aspects.
Some related links (in English):
New KOMPAS-3D V13 from ASCON integrates Lightworks Artisan
ASCON Announces the Release of KOMPAS-3D V13
LEDAS Implements Variational Direct Modeling in KOMPAS-3D
COFES 2012 (list of key participants)
Posted by David Levin at 3:10 PM No comments:

Who should pay whom? An AECCafe-isicad dialogue

This (see below) response from AECCafe seems to me unreasonable if not ridiculous. I believe media is interested to expand its readership especially to a huge not English-speaking country, isn't it? However I may be wrong because not fully comprehend the laws of this business... And would it be a violation of IP rights if isicad.ru will just retell this article of AECCafe? BTW, what could be the price for translating into English and publishing, say, of our own review of the market trends or its update for Autodesk Forum 2011? Would appreciate any instructive comment.
Hi
We're running a leading Russian CAD-portal isicad.ru. Recently, I've read your article "Top Ten AEC Technology Trends of 2011" and found it quite interesting. So far I ask your permission to translate this article into Russian and publish it at our isicad site.
Kindly,
Vladimir Malukh, isicad.ru editor, LEDAS director for PLM services
Hi Vladimir ,
Yo can republish this article for US $500. Let me know if you are interested.
Thanks,
Sanjay Gangal, AECCafe.Com
Posted by David Levin at 4:25 PM 3 comments:

1600+ pages of almost the whole truth about all of us: The Russian PLMpedia

The Russian Web Encyclopedia PLMpedia.ru was founded by LEDAS during the preparation of the forum isicad-2008 as the online version of the vocabulary section of the monograph "The Encyclopedia of PLM» - the book which gradually became a rarity. To give you an idea about this web site, I will show some screenshots to begin with a front page whose some components randomly change from time to time (click to enlarge all pictures): 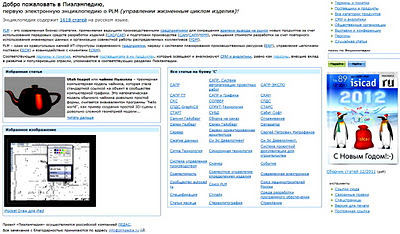 Over the past four years, PLMpedia became well ahead of its printed version, now in contains more than 1,600 articles (all in Russian) on engineering software​​ divided into more than thirty subject categories. Very probably, one of the most valuable sections is "Industry Terms and Concepts", a fragment of which is shown in this figure: 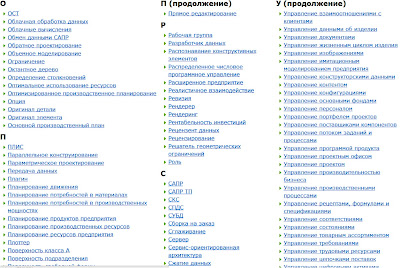 Now, a fragment from one of the largest categories "Vendors and their products": 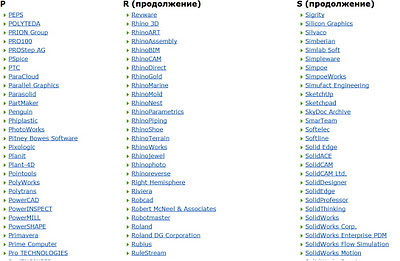 In addition to the descriptions of products, technologies, services, and terminology, most of the articles contain references to the vendor websites. Here is a sample article "3D Geometric Kernel" relating to the "Industry Terms and Concepts" (the section which was substantially enriched thanks to the information kindly provided by CIMdata):

Note that at the end of encyclopedia articles there usually are links to relevant fresh publications at isicad.ru. Such links can also be found in other sections, for example, in the sections that describe companies (here - ASCON):

Obviously one of the largest section is about products (note: placement of banners at isicad.ru automatically implies their putting at  PLMpedia):

"Persons" section is also supported (but worthy of a radical extension). An example is an article about John Walker published at PLMpedia long ago and these days widely circulated in the web due to the 30th anniversary of Autodesk: 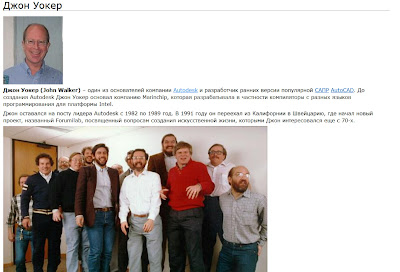 We try to carefully maintain and expand the section that represents the Internet and paper media including analytics & consulting, here is a a fragment, I hope, in fact, all are presented: 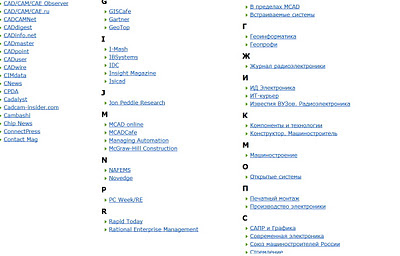 Today in Russia, and, perhaps, and in the world (could somebody correct me?), there is no analogue of such PLM Encyclopedia which by the way is attended quite actively. All comments, corrections, contributions, recommendations are welcome to info@plmpedia.ru or info@isicad.ru.
Posted by David Levin at 2:10 PM No comments: