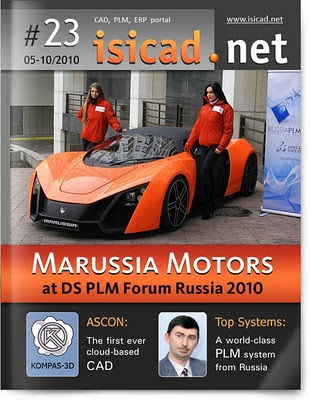 If you don't receive by e-mail my quaterly overviews of the Russian CAD/PLM market, you can take a look at a web variant of the today's report at isicad.net. Below I put an introduction for this paper.

Basically, we use news, press-releases, and papers published earlier at isicad.net. However few actors of the Russian market produce English publications about their local activity in Russia. In important cases, we try to retell their Russian news just in our own words. Since autumn of 2009, we’ve got a great support from bloggers and journalists who write in English and visit(ed) Russia: this started from a remarkable series of Ralph Grabowski and then was continued by Deelip Menezes, Oleg Shilovitsky, and hopefully, Martyn Day.
isicad.ru has no data from vendors about current volumes of their sales but general situation at the Russian CAD/PLM market is characterized by:
- nobody mentions crisis,
- everybody publishes news about new contracts and organizes big conferences and seminars everywhere in Russia.

My own formulations of companies' news in few words are as follows:
- 1C with its huge small-ERP reselling network and together with APPIUS is getting closer and closer to PLM,
- ASCON strongly emphasizes its SaaS / cloud service but does not forget improving its MCAD,
- Autodesk CIS is more and more improving communication with mass Russian market,
- Dassault Systemes promotes its social networking and continues working with big industries,
- LEDAS reconfigures its business and persistently moves towards implementation of direct modeling and its applications,
- Nanosoft continues promotion of its native free platforms but balances this by more reselling of Western products,
- PTC is enhancing its (already strong) distribution network,
- Siemens PLM promotes its ST3 and continues working with big industries.
- Top Systems announced that they have a full-scale world-class PLM.

See the whole paper with a dozens links here.

Posted by David Levin at 7:56 PM No comments:

About DS Marketing: The Road to CATIA V6 and SolidWorks through Facebook

On October 14, Alexey Ershov, CTO LEDAS attended Dassault Systemes’ PLM Forum, traditionally held in Moscow hotel Radisson Slavyanskaya. The purpose of Alexey were business negotiations and meetings, though along the way he served as a correspondent of isicad.ru, preparing a report from the Forum and taking an interview with Thierry Collet, Dassault Systemes Vice-President on marketing and education.
Here some of the questions:
See a full text of the interview.
See an illustrated report of the DS PLM Forum.
Posted by David Levin at 7:20 PM No comments:

LEDAS about ST-3 from Siemens

In addition to the common natural interest to Synchronous Technology, LEDAS-isicad has its reasons.
First, LEDAS develops its own version of direct modeling - both incorporating it into some applications and providing corresponding technology to the CAD vendors who wish to increase competitiveness of the systems they produce. Second, at isicad.ru we regularly test new capabilities of the latest versions of popular CADs and publish (in Russian) our opinions as for example "3D marches en masse with AutoCAD 2011", "New gimmicks in Inventor 2011", "On-line KOMPAS – in the isicad’s pocket", "From idea to result with SolidWorks-2011", and others.
So it's clear that for long we have wanted to practically see what is Solid Edge with synchronous technology. Unfortunately, out attempt to obtain a trial license for this product was not successful: representatives of the office of Siemens PLM Software in Russia refused to grant such license to us, explaining that staff members of the editorial board of isicad.ru also work for LEDAS.
But recently we were happy to read a detailed characteristics of ST-3 in a remarkable series of dozen posts of Deelip Menezes. Information Deelip shared with the readers have been sufficient enough for Dmitry Ushakov to arrive to some conclusions about ST3, which he formulated in his article published in Russian the next day after Deelip's publications and today published in English translation "Synchronous Technology: the Third Attempt".
Dmitry's paper is not just a retelling of ST-3 features: it characterizes fundamental constituents of direct modeling as a general new generation approach, analyzes consequences of combination of procedural and declarative features, formulates a hypothesis about what is really done in ST-3, gives a list of references including comparatively early research publications, and other.
The paper also compares ST-3 with the approach of LEDAS, in particular Dmitry says:
"... The idea (of the LEDAS approach) is that the end-users work directly with geometry – bypassing the intermediate level in the form of features. In particular, our users can manually set any geometric or dimensional constraint between any geometric or dimensional constraint between any faces, edges, and vertices of a boundary model. What is even more important that our system can automatically recognize most of geometric constraints (parallelism, perpendicularity, coplanarity, coaxiality, tangency, equal distances and radii) and take them into account performing direct modeling operations".
The LEDAS approach is emphasized in the title of one of the previous Dmitry's publications: "Variational Direct Modeling: How to Keep Design Intent in History-Free CAD, 2008, LEDAS Ltd".
Dmitry concludes his paper with the questions: "Synchronous technology is our future but why it has to come in the same package with an obsolete apparatus of history-based parametric modeling? These two approaches can hardly be combined due to significant conceptual differences, and as result a composed solution is controversial and unnatural for the users. Can it happen that Siemens disappoints its users with an excessive complexity of its combined solution? Would it be better to keep synchronous technology in its pure form – without linking to the traditional approach? We will not get the answers to these questions now, but Siemens solution has paved the way to other vendors who may prefer different strategies for launching s similar apparatus. That remains to be seen. In LEDAS we intend to be actively involved in the process".
PS. Perhaps this article will encourage Siemens to grant isicad/LEDAS a trial license for a new version of Solid Edge.
Posted by David Levin at 12:00 PM No comments:

All about AutoCAD for Windows, Mac, Linux, clouds, and other

DEVELOP3D makes the first step to the Russian market with isicad.ru

There are people who believe that magazines (especially paper versions) are not effective and will not survive. Nevertheless some are obviously attractive and successful. A good example is DEVELOP3D founded and published in the UK by well-known experts and journalists, Al Dean and Martyn Day.
DEVELOP3D is based on both high competence of its editorial board and its business scheme. The journal has printed and electronic versions - the latter is available as a blog-like web site or can be downloaded as a PDF-copy of the printed version. The magazine is free for its readers, business comes from advertising published in the paper version. The concept of the magazine combines seriousness and substance of articles with a modern design - a bright and attractive but from my point of view never going over the brink of kitsch. Everybody hopes that professional magazines are independent in their opinions, and DEVELOP3D seems to be a good example of such independence which is very important for serious readers.
isicad.ru always believed that DEVELOP3D could be useful for the Russian CAD/PLM market therefore I am glad that during a recent visit of Martin Day to Moscow and Novosibirsk, we agreed on some kind of cooperation. In particular, from now on we will highlight new DEVELOP3D publications and translate the most interesting articles into Russian. In particular we've put a block of news from DEVELOP3D on the front page of isicad.ru (see a picture above or the block itself): just as we do for the relevant Russian magazines CAD/CAM/CAE Observer, "CAD and Graphics", and PCWeek RE.
Posted by David Levin at 2:48 PM No comments:

What browsers are preferred in the Russian CAD market? 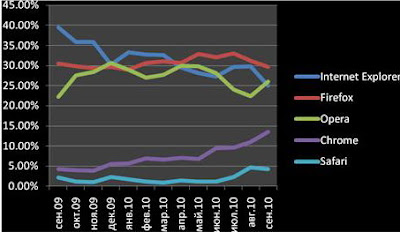 Recently published data presents that probably for the first time, Internet Explorer has less than a half (49,87%) of the world browsers usage; in previous month it was 51,34% while a year ago 58,37%. Firefox has very stable second position with about 31% , and Chrome is the third: during the last year it has grown from 3,69 to 11,54%.
In Europe IE had in September 40,3% and 52,3% in North America.
In Russia such statistics is quite different: Firefox is a stable leader with 33,03%, and then: Opera (30,18%), IE (25,61%), and Chrome 8,84%.
A picture above shows statistics related to the visitors of www.isicad.ru. These data may be considered as characteristic for CAD/PLM vendors / distributors / advanced customers in Russia and CIS.
Posted by David Levin at 7:12 PM No comments:

English-language publications about the COFES-Russia seminar held on 21 September in Moscow are for a few days behind the publications in Russian. I mean publications from the organizers since, fortunately, Russian bloggers and traditional press paid quite a lot of attention to the event: isicad tries to collect all such posts but they can hardly be translated...

Today I posted a relatively short English report about the event - albeit covering all parts of the event as well as containing 50+ characteristic photos and links to all video and audio (mostly in Russian): "What could be seen and heard at COFES-Russia/isicad-2010". This is a translation of the original, I beg your pardon for not yet corrected and polished English. All kinds of feedback are welcome.