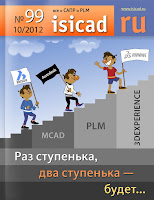 I have just published at isicad.net an overview of the Russian market based on the vendor's events held in October. The first paragraph of the report says:
The cover of the 99th issue (October, 2012) of isicad.ru reflects several events related to the Russian market of engineering software (see all the covers). Some of them mainly belong to the genre of marketing. However, smart marketing not only can shape customers’ demands but in the long run transforms vendor’s virtual manipulations into their innovative software… Some important characteristics of the Russian market are described in the reports from numerous events held in October. Unfortunately, most of the links are in Russian however, I will try to give you some flavor of the state of art.

Here are the titles of the report sections:

Octover, 3 and 4. The First Autodesk University in Russia

October 18. SolidWorks has a lot of very devoted and compassionate fans in Russia: can it increase the company’s Russian market share?

October 25-29. SDI Solution is a partner of everybody?

October 30. Location and industrial development of Yekaterinburg attract all vendors.

See the full text of the report.