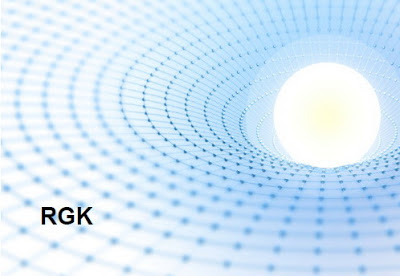 You may have already heard about RGK - the project financed by the Russian government - aimed at building a geometric 3D-kernel. Until yesterday, all publications on RGK were in a meta-style, like for example a press-release  "RGK Russian Geometric Kernel Celebrates First Full-Featured Version" or my paper "Geometric Kernels and Irremovability of Presidents from Office".

Recently, the project (initiated in 2011) has come to the stage when the system became   operational and is under intensive integrated testing.  This enabled writing and publishing a rather detailed technological and technical overview of the achieved results.

The paper published yesterday and written in Russian consists of two parts. The first part  describes architecture, advantages, and facilities of integration the kernels with applications.  The second part presents functionality and the instruments to support building of standardized MCAD applications. The text of about twenty five A4 pages includes 14 pictures and three video clips. See couple examples below.

isicad will definitely publish a slightly shortened English version before beginning of COFES Russia 2013, i.e. before May, 30.

The results of "Sweep" generator: 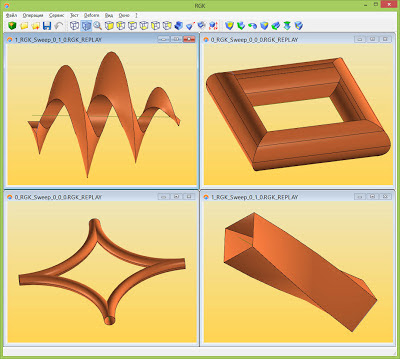 Kinematics of the mechanism is simulated with the Constraint Solver integrated in RGK:

Posted by David Levin at 1:04 AM No comments:

Who are More Interested in the Future of Engineering Software (in Russia): Russians or Foreigners?

My isicad.ru editorial of April (in Russian) was mainly about forthcoming COFES Russia 2013 in Petergof near St.Petersburg. The paper was illustrated by a cover page of our isicad.ru issue No.105 whose headline says “Let’s Fly to St.Petersburg: 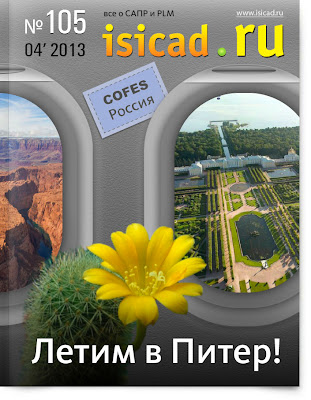 (Here you can see an animated version of this picture - a small video clip presenting a way from COFES 2013 Arizona to COFES Russia Petergof.)  My editorial presented some recently registered participants of COFES Russia. By today, more than one third of the registered participants are from US and Western Europe. Although in recent years, the Russian market has made a considerable progress in integrating into the global market and in recognizing the value of strategic analysis one can sometimes get impression that people in Russia are comparatively less interested in market and technology trends and believe that their today’s business decisions and current pragmatics are much more important. Moreover, sometimes it seems that global vendors and analysts are more interested in the future of the Russian market than the national actors.

Here is a translation of a fragment from my editorial.

… Not trying to offend Russian participants, I believe that a strong growth of the number of participants from other countries is the most interesting. However overused is the phrase “it reflects an increasing interest towards the Russian market”, it has never been more just. I started describing the reasons underlying the interest of foreigners to the Russian market of engineering software and then I realized that almost the same reasons determine the potential of a symmetric interest of representatives of the Russian market in the global market. Before giving some grounds for the mutual interest, let me explain that in many cases I include in “our” market not only Russian suppliers and developers but also all members of staff of the offices of foreign companies in Russia: regardless of any strict corporate discipline imposed from above, the realities of our market and creativity of our fellow countrymen produce a unique experience which undoubtedly can be useful for the global market:
•         Some foreign vendors see here a new potential for expanding its customer base; some Russian companies can find new active business-partners, while others factor in possibility of emerging new competitors
•         Nearly all representatives of media and analytical agencies observe in Russia a source of a significantly new information and data for further analysis; while Russian companies can make a name for themselves on the global market practically for free and in a rather efficient manner
•         Those interested in technological ideas know that such ideas are always thick in the Russian air, although by no means always they are made use of here; and dissatisfied Russian developers of new products obtain additional chances to find proper business partners
•         High-level qualification and (to put it mildly) competitive ability of Russian developers, mathematicians and engineers have never been questioned
•         All vendors’ experience of working on the Russian market (not least of all – foreign vendors) - in many cases is creative and unique
•         In spite of a questionable state of the investment climate in Russia many investors are ready to put in the capital in high-tech Russian companies and teams
•         Foreign experts are prepared to operate as consultants for ambitious and solvent Russian companies specializing in engineering software...

The list can be continued and extended, but, in my opinion, such concreteness is not necessary. I am convinced that if one has a common taste and a need to acquire new information, as well as some communication skills, after two or three days of sharing time with a hundred of profound, very different, and to a considerable extent new people in a properly organized environment, such a person will inevitably learn a lot of useful things. Even if one does not admit (or even repulses), does not realize or does not fully realize this usefulness, I believe that it always and without exceptions, sooner or later, sprouts out in the brain of any skeptic, or, at the very least, by transit, reaches his/her colleagues.

However, private business sets its tasks independently and even – up to a certain moment – determines the criteria of its success. If someone already isn’t poor and positions one’s company at the corporate web-site almost as a global leader and feels quite comfortable, why one should risk peace of mind and face embarrassing circumstances, exposing a particular solution for the scrutiny by ultra-qualified experts and immersing in potential or explicit competitiveness, etc.? It may seem that my words have some elements of a1rrogant sniping. Well, no; since business it not just earning money. It is also a creative self-expression, which can take very diverse forms and scale, and for which there cannot be single quality criteria...However, different persons set very different goals for themselves...

So, which of the re-emerging names of participants attract the most of my (subjective) attention?

Evan Yares was one of the brightest participants of isicad-2004 multi-vendor Forum in Novosibirsk. After that isicad.ru published a lot of papers by Evan, and I very much appreciate his participation in COFES Russia 2013 and look forward to his analyst briefing “The Future of Data Management and Search”.

I was always surprised by relationships between SolidWorks Corp., DS, and Russian market. To my mind, SW could sell in Russia several times more copies and services than they do it now. Maybe Boris Shoov, Dassault Systèmes SolidWorks Corporation, Partners & Alliances, Technology Director comes to investigate situation? Unfortunately, DS itself will not be presented at COFES Russia while Siemens PLM sends three persons: top managers of the Russian office plus David Mitchell, Vice-President, Teamcenter CTO.
It is worth mentioning participation of the owners and top managers from Gräbert Company:  Wilfried Gräbert, CEO и Robert Gräbert, CTO.

One of the keynote talks will be done by Yurii Udaltsov, Director of Innovation Department and member of the Board of Rosnano – the leading Russian enterprise known by vast investments in Nano-technology and other high-tech industries. In his presentation “Investing in Technologies for Innovation” Yurii  will discuss Rusnano’s experience in material-based high-tech investment and role of IT technologies as enabler of high-tech innovations. In addition to a discussion of relevant and interesting Rusnano projects, the keynote will focus on areas of interest from the point of view of integration into global innovation process, as well as developments in Russia as a potential source of engineering, IT and R&D source for innovation start-ups.

Posted by David Levin at 4:30 PM No comments: