ASCON, the Largest Russian CAD/PLM Company: Results of 2010 and Plans for 2011 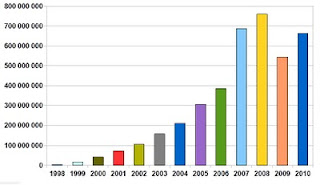 ASCON is keeping not less than 25% of the Russian CAD market – approximately as Autodesk and considerably more than other world leading CAD companies. At a press-conference in Moscow on 2rd March, ASCON top executives announced figures characterizing company performance in 2010 and plans for 2011.

In 2010 the company attracted at least 600 new customers, while the overall number of the companies using ASCON solutions exceeded 6000. Sales reached 662,9M Rubles (approx. $23,4M compared to $18M in 2009). ASCON is committed to the principle of open information policy and is the only player in its segment of the Russian IT-market that discloses financial results. Maxim Bogdanov, ASCON CEO: “We have achieved 20+% growth of the income although recovery of the Russian economy is on the whole quite modest. This is a result of our effective planning and determination on our business development which was based on our precise taking into account the conditions of Russian business environment and hypothesis of the Russian industry state-of-art".
More than 70% of the ASCON income relates to selling of its original CAD/PLM software. In 2010, ASCON increased a number of sold licenses for all its products:
- KOMPAS-3D (mid-range parametric mechanical CAD): by 38%,
- VERTICAL (CAPP): by 26%,
- LOTSMAN (PDM/PLM): by 59%.
With regard to industry markets, 70% of sold software products were design and manufacturing solutions for machine- and instrument- building, 30% - design solutions for industrial and civil construction.
In 2010 ASCON focused its efforts on the industries of defense, nuclear, oil and gas, oil and chemistry, and metallurgy. It's worth mentioning that 38% of the ASCON customers are from state and defense organizations. A list of new customers looks rather impressive.
Among key events of 2010, ASCON emphasizes transition of KOMPAS-3D into a class of hybrid modeling systems and launching a commercial access to KOMPAS-3D in SaaS mode.
2011: Plans and Events
In 2011 ASCON is planning to make a serious jump to reach 800M RUR (about $28M) of income.
A release of KOMPAS-3D V13 for Russia is planned in May, and in October - for the global market.
ASCON wants to expand its competence in engineering industry from traditional design to manufacturing. To implement this, the company plans to release in autumn its system GOLFSTREAM for planning and management in manufacturing.
At the above mentioned press conference ASCON organized a show to compare past and future technologies (see here a video of this episode): 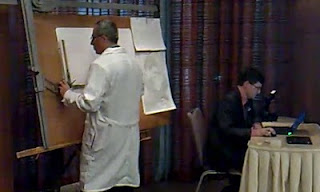 ASCON web sites: in Russian and in English.