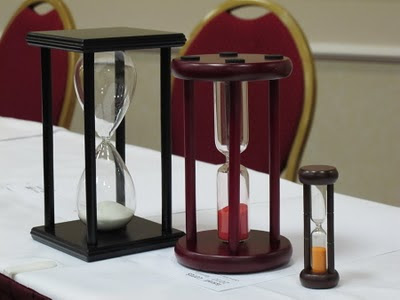 Last week my team and I were very busy with the COFES-isicad preparation and the event itself, a lot of business contacts, attendance of Moscow Autodesk Forum, close communication with Martyn Day and Deelip Menezes in Novosibirsk. Also we have a lot of responsibilities such as publication of the presentations made at the event...
On the whole, lack of time was a problem for our event. In particular, we used sandglasses (see the picture above) to indicate speakers how much time they have.
Some Russian bloggers have promptly published their interesting illustrated posts in Russian. Obviously some of you could between 18 and 25 Sept read live twittering from Deelip and Oleg as well as very rich Deelip's blogging.
As one of the defects of the event, some people reasonably indicated panel presentations that somewhat looked like vendors advertizing - very strange looking in the audience of competitors. (I cannot completely agree with this but will comment this situation in details later). One of those blaimed in advertizing was Sergey Kuraksin, founder and CEO of TopSystems who made a 10 minutes panel talk speaking about his advanced PLM system. During this speech Deelip twittered: "This is not COFES!". However the photo below demonstrates how Sergey is involved into heated discussion partially provoked by his panel. At this moment Deelip twittered: yes, now it's COFES! 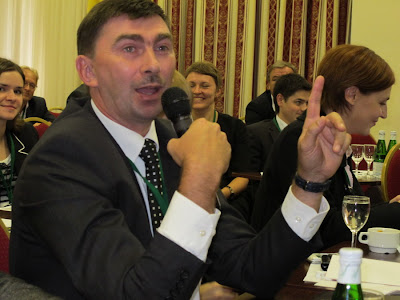 Initial reports and posts about the week in Moscow and in Novosibirsk have already been published in Russian at www.isicad.ru and in my Russian blog.
Today I started trying to cover the events in my English blog. One post "How COFES-Russia and Autodesk Moscow Forum were prepared" has already been published. isicad.net will later publish in English a detailed report of the events.
30 minutes ago I was heavily thinking how can I promptly but distinctly announce that COFES-Russia has been held... Suddenly a miracle happened: Oleg has just published a post (COFES: Russian Style!) that just does my challenge. Many thanks to Oleg!
Below you can see a moment of the closing ceremony: Brad keeps a winter hat (possibly a symbol of Siberia or Russia - but not of this summer with its +40C) while I keep a cactus (considered as a symbol of COFES in Arizona)... You can take a look at the initial portion of photoes just publihed here.