CAD/PLM in June: How I Saw It From Russia Or Within the Country. Part I: Top Systems and Siemens PLM

You may consider this post as a June part of an overview which almost quarterly I try to compose at isicad.net (see for example this). On the other hand, this post is to some extent an overview of my Russian posts of June. This combination has a contradiction since in the English isicad.net overviews I aim to present some key issues of the Russian market while my Russian blog of course includes some comments on events of the global market. Besides, my Russian posts usually include a lot of Russian cultural context which I am absolutely not able to transform into English…

1. At the beginning of June, Top Systems, the second (after ASCON) Russian CAD/PLM company known first of all by its powerful Parasolid-based  MCAD T-FLEX, held its big annual conference. At the conference the company announced “PLM+” characterized as follows:  «Its fundamental distinction from traditional PLM solutions is an essential extension of integrated software environment which now covers not only tasks of life-cycle but all its accompanying processes».  (For the first time this PLM+ was briefly mentioned by Top System CEO Sergei Kuraksin at COFES-Russia-2010 seminar in Moscow). In one of my June posts  I asked Sergei “What traditional PLM solutions he means, maybe those of DS, Siemens, PTC, ARAS or even Autodesk? What are the tasks not covered by traditional PLM that are solved by PLM+? Are there any tasks solved by traditional PLM and not solved by PLM+ based on T-FLEX?...”
My conclusion was that although Top Systems do not follow modern trends of mobility, social networking, SaaS, and other, the company can probably succeed with some big Russian enterprises, say from defense domain, that are traditionally more conservative. (Note, that Top Systems has quite a good customer base since the company basic solutions are actually effective, however until recent time, marketing of Top Systems was rather rudimentary). Finally, I wrote that such gigantomania may be a result of some inferiority complex, and, building PLM+ may help in its satisfaction:). Later, in the comment section of my post, we had with Sergei a nice discussion, and soon Top Systems has published an article which made their PLM+ concept more clear, it looks like that PLM+ is PLM+ERP (you can conclude this from the TLAs seen at the picture below). 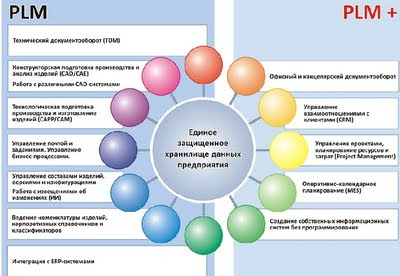 My above mentioned post has a title “Prompt Psycho(analysis) of Some Recent CAD Publications”. Along with Top Systems, I touched there Siemens PLM and PTC.
2. With an objective to give Russian readers my impression about «Global Launch Solid Edge ST4» I retold and commented couple posts of Roopinder Tara. I am not going to retell them for you. One small terminology nuance attracted my attention: Tony Affuso speaks not about necessity to work more with SME but with midstream enterprises. Is small not a word from Siemens PLM lexicon? At least subconsciously?
My own opinion about Solid Edge and its future:
- ST is a successful pioneer of Direct Modeling which will inevitably win the future of MCAD (we at LEDAS are confident about this not only from publications but from our own projects),
-Solid Edge is definitely a very good system (it’s a pity that Siemens never agreed to give LEDAS trial versions or so: was this because of the  competition between D-Cubed and LGS),
- I estimate the probability for Solid Edge  to rise from its current (3rd?) to 1st or 2dn place (today kept by SW and Inventor) or even to approach them as much as 5% - practically independent of SPLM marketing efforts,
- However  we can rather probably soon hear about something like hundreds if not thousand installations of Solid Edge to one or other “Daimler-Benz”:),
- 5% of positive probability I give to the scenarios such as «DS actually kills SW» or/and  «Autodesk makes something crazy with Inventor »:).
BTW, I am pleased to mention a remarkable and very large interview with Chuck Grindstaff, President and CTO of Siemens PLM Software taken by Alexandra Sukhanova, executive editor of the Russian language magazine “CAD/CAM/CAE Observer” published in Riga, Latvia. 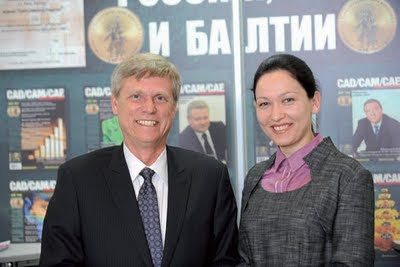 Just look at the great gallery of interviews taken by Alexandra during last several years). It would be strange to retell here the interview with Chuck called “The revolution in CAD/PLM should not lead to discontinuity of innovation process”), I can only mention that he perfectly combines his CTO role (characteristics of SPLM solutions) and that of the President (characteristics of competitors and comparison of SPM with them). It looks like he is strict and biased to DS (main and dangerous competitor?), demonstrates  indulgence to PTC (not main competitor?), and does not take seriously Autodesk (not a competitor at all in SPLM key business?)… Alexandra kindly permitted me to re-publish this interview at isicad.ru, and I hope we will see an interesting discussion.
Posted by David Levin at 1:31 AM