Look at the passage from a recent press-release  of Lightworks:
SHEFFIELD, UK (9 August 2011) - Lightworks, the world's leading supplier of rendering solutions for developers of advanced 3D computer graphics software, has today announced their partnership with ASCON, a developer and integrator of professional CAD/AEC/PLM solutions.
ASCON, one of the first CAD developers within the Russian market, produces the KOMPAS -3D modelling software sold to over 40,000 customers all over the world. ASCON has licensed the Lightworks Artisan product and will be offering their customers a plug-in to this from KOMPAS-3D. ASCON will become the first company in Russia to sell an Artisan-based product when they release in September...
The case itself is ordinary for the global market but note that Russian software companies were so far typically inclined to do everything in-house. This can be explained by several reasons: survival of Soviet mental and actual isolation, references to Russian industry specifics, lack of international communication and foreign language skills, side-effect of really good high tech education and competence that in contradition with business and common sense prompt to believe that "we can do everything ourselves and better than any others"... During couple recent years ASCON seems to clearly overcome this defect and is intensively trying to be included into the global market with its specialization of labor. I think this is a clear sign of ASCON's maturity.
Now look at the post by a very popular Russian blogger cadovod - Oleg Zykov - who is  the manager for innovation projects at ASCON (nice and meaningful position, isn't it?):
When in my blog I promptly reported the visit of our ASCON delegation to COFES 2011, some readers justly reproached me: where are business issues? it looks like COFES is something which enabled you to visit Hollywood! Then Vladimir Malukh (LEDAS-isicad) rightly pointed out that COFES is not for spectators, it is for participants. Today I am at last able to tell you about one of the results of the ASCON attendance of COFES 2010: it is about our contract with Lightworks...
I can assure you that the agreement with Lightworks is not the only one ASCON brought from Arizona.
As for LEDAS and isicad, we are definitely aware about unique importance of COFES events: Vladimir Malukh (LEDAS Director on engineering consulting) in 2009 and Dmitry Ushakov (LEDAS CEO) in 2011 were among the participants,  see a COFES report of Dmitry who came back from Arizona also not empty-handed. Moreover, we have organized in Novosibirsk three COFES-like events - isicad 3-days multi-vendor forums (2004, 2006, 2008). 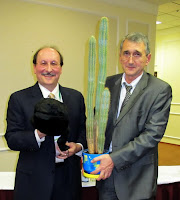 And in September 2010 I was very happy to have a lucky opportunity of combining great COFES experience of Brad Holtz with isicad popularity in Russia: we have prepared and held in Moscow a COFES-Russia seminar combined with a one-day isicad event (NB: Oleg Zykov made there a presentation about ASCON's practical results on cloud-based KOMPAS 3D).
There in Moscow, Brad has remarkably presented both the COFES idea as well as his unique personal competence and charisma. (At the picture - opening of the Moscow event: in a moment Brad will put a Russian fur hat on a cactus, a symbol of Arizona).
The presence of Russians at COFES has thereafter multiply increased and in future will likely increase more. Besides Arizona, people seem to be eager to attend next regional COFES which may be held in Russia or somewhere around...
Russians in Arizona, April 2011: 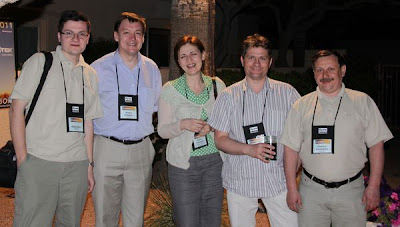