In October, Dassault Systemes will throw a VIP-bomb at Russia 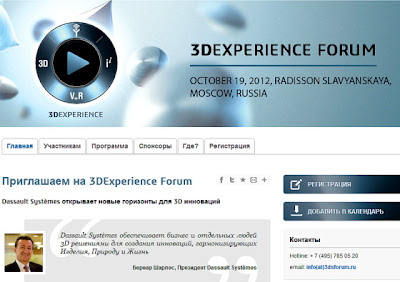 Since 2004, initially together with its Key Distributor – IBM, Dassault holds its PLM Forum in Moscow. In one form or another, isicad was lucky to take part in these events, here are our richly illustrated reports: PLM Forum 2004, PLM Forum 2005, PLM Forum 2006, PLM Forum 2007, PLM Forum 2008, PLM Forum 2009 , PLM Forum 2010,  PLM Forum 2011.  Note that isicad is a part of the Ledasgroup whose software development branch has for a long time been a close outsourcing partner of DS.
DS has always shown great interest in Russia – taking into account the country's huge potential for industry and economic development. One of the proofs was that Francis Bernard, the DS Founder, its first president, and actual inventor of CATIA, in 2005 became the first director of Dassault Systems Russia.  Also, we could see how, from year to year, the Forum was attended by more and more high ranked representatives of the Paris office.
This year, the event has been rebranded into 3DExperience Forum and is going to set a record that is unlikely to be ever surpassed. Take a look below at the official list of the DS attendees and judge for yourself (in brackets – some comments from isicad).
1. CEO Bernard Charles (some of the isicad experts will not be surprised if Bernard meets Putin or Medvedev or somebody close to them)
2. EVP Monica Menghini
3. Vice-President Marine and Offshore industry Alain Houard (NB: there is a huge project to build a number of helicopter carriers based on a French license);
4. Vice-President Transportation and Mobility Olivier Sappin (NB: AvtoVAZ is increasingly more oriented to Renault);
5.  Vice-President Energy, Processes and Utility Stephane Declee (nuclear energy is a very attractive sector of the Russian industry where Bentley and Intergraph are already quire successful);
6.  VP Sales Aerospace and Defense Patrick Fardeau (these industries are traditional for DS – also in Russia, however a competition with Siemens needs more and more attention and efforts).
7.  Paris people from 3DVIA, as well as from Academia, Customer Goods, and Retail.
You can take a look at the Moscow 3DExperience Forum web site (in Russian)  .
Posted by David Levin at 7:32 PM